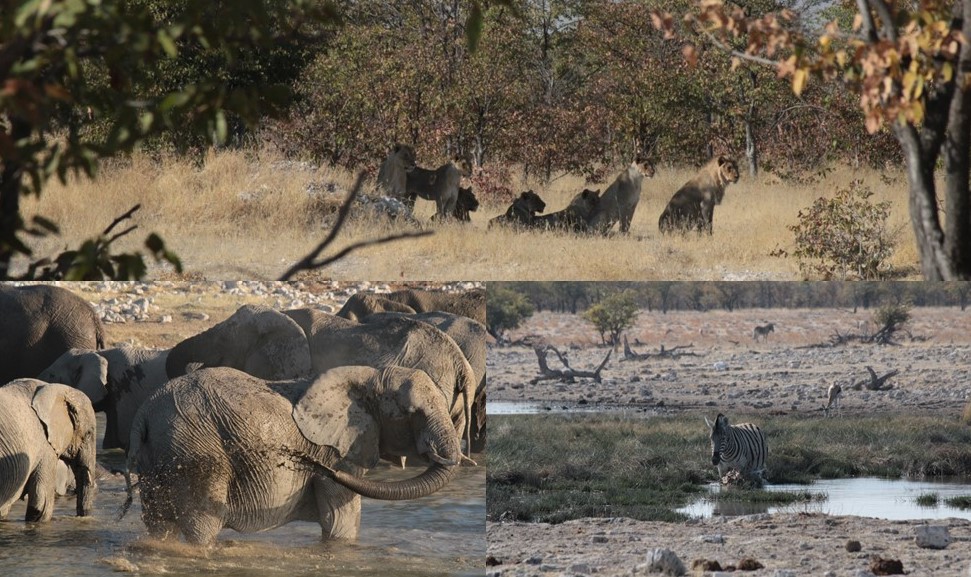 Our third stop on the tour of Namibia took us to the most famous national park in the country: Etosha. The park is made up of open grassland that surrounds a salt flat which makes up most of the park, providing an incredible opportunity to see animals walking miles out.

Our first of two days at the park saw us following the back roads to the right of the camp as we drove to the various water holes on the map. Etosha has an incredible number of gazelles that adorn the sides of the road and can be found at almost every opening in the park. The first water hole we visited was one of the more popular ones with just as many jeeps as there were zebras, wildebeest, oryx and ostriches who walked in between the cars as well as fighting and taking sand baths. After this, we tried to go where there were less cars so we drove to various smaller water holes, some of which didn’t contain water. You aren’t allowed to leave your vehicle except for in certain fenced picnic spots so we stopped at one of those which had a large gap in between the gate and the fence that any leopard or lion could slip through, so I guess it was more of a placebo, but it was a necessary stretch nonetheless. The day was exiting but the novelty of seeing a gazelle began to wear off and they became quite annoying when your mind tricked you into thinking they were something interesting like a cheetah. We had to be back by sunset, so we directed ourselves towards the exit but on the road in the distance we found the safari signal for something impressive being a mass of parked jeeps. We drove up and spotted through the bushes a lion standing up under a tree. My brother enjoys his photography but unfortunately, I don’t think he understands that animals move and that you can only capture them in certain positions for a couple of seconds so one by one the lions stood up and walked into the bushes and each time my brother was changing some settings or even reading a book. One of the great entertainments of Etosha is seeing the battle between professional safari jeeps who follow some unwritten rules of right of way, how to park, when to move, etc. verses people who bring their own cars and happily pile in front of someone else’s view or into another vehicles exit route and have to revers back whilst being staired down by all the other drivers. Fortunately, the lions became so lazy that many people’s attention spans had expired in the time we were there, so we were able to drive through the cars until we found the spot that they had all retreated to which, though slightly further back, was not covered by any bushes and provided a much greater view of the pride.

We left the park and returned the next day having done a bit of last-minute research which told us that the water hole in the main camp was the place to be when the sun set so armed with that knowledge, we set off to see the expansive plains. These were a sight to behold for as barren as they seemed at first glance, looking through the telescope gave a completely different view; one of a plain teaming with life as huge herds of wildebeest and zebras marched on past giraffes and elephants. What was amazing was how far out the animals were (which is why you couldn’t initially see them) as there didn’t appear to have much water or vegetation. It was here that I made one of my proudest spots of the holiday being a spotted hyena walking towards the edge of the plain before it soon collapsed in the first bit of shade it arrived at. The second day was spent doing more of the same as but then we made our way back to the main camp ready end our time at Etosha at the aforementioned water hole. We read that elephants came here to drink which sounded cool but we had seen a fair few that day so I wasn’t expecting anything extraordinary but just a around a minute after arriving, a heard of 25 elephants walked up to the water. The sound of their movements alone was amazing as everyone made an effort to be silent but then one elephant stepped into the water, then another, and another, and another, until every single one of the 25 elephants was fully submerged in the water at the same time. The smallest ones had their noses just above the water level like a periscope and the sound was deafening as their movements created waves in the small pond whilst they flapped their ears and sprayed water on themselves. The whole spectacle only lasted a few minutes before the group sprayed dust onto their backs again and set off in a mesmerising march; a fitting end to Namibia’s biggest park.