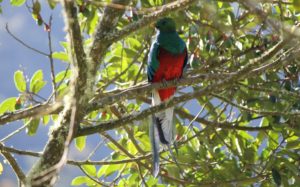 In the summer holiday of 2016 we went to Costa Rica. While we were there, we stopped by at a place called monteverde to look for hummingbirds but mostly to see a quetzal.

I was watching The great British bake off when my dad came into the room with a big grin on his face. He said he had seen the rare bird in somebody’s farm in an avocado tree. I sort of sighed because birds weren’t usually to my taste but my dad said there was a cafe, so I got up and left. We walked about ten minutes over to this guys farm and went up all the way to the avocado tree which was at the border of his property and there in the tree was not one but seven quetzals! We then went down to his cafe and stared at the photos of quetzals on the wall. As we left we passed a small shop and at the back, in a glass frame, was a quetzals feather. I said earlier that I didn’t really care about birds, but this one was impossible not fall in love with, everything about it was beautiful: its green chest, its red belly, its long tail feathers

Its rare enough to find 1 quetzal let alone seven in one tree and especially rare to see a magnificent male with large tail feathers like the one pictured above. Local people in monteverde loved the quetzal too and it looked as if their economy was based on it because every restaurant, every shop, every bar and every hotel had something that resembled a quetzal.